Who Is Mustang Bob

“Mustang Bob.” It was a name I heard numerous times through the years. When I was deep into the restoration on my 1966 Mustang, it was “Mustang Bob might have a dash pad he will sell you.” When I looked at a particular craigslist ad for a classic Mustang, his name reappeared. “The wheels aren’t for sale. They’re loaners from Mustang Bob.” And when I spotted the shape of a classic fastback Mustang underneath a car cover that I thought might just be in rough enough shape that someone like me could afford it? “That’s Mustang Bob’s, and I’ve seen him turn down $10,000 for it.”

He was a ghost as far as I was concerned. I once tried calling him and the number I had entered into my phone was wrong. If I passed him on the street, I wouldn’t know his face. If I ever wanted to look him up, I couldn’t because I didn’t even know his last name. He was just “Mustang Bob.”

When I wanted to get in touch with him to find out exactly who he was, it started with a call to Edward’s Upholstery. Edward let me know he worked at Carter Engine and Machine, so that’s who I called next. I asked for “Bob,” and after a short wait, there was a voice on the line.

“Is this Bob. Mustang Bob,” I asked. He laughed and confirmed. After a brief conversation, here’s what I knew: He was kind. Jovial. Open. Willing to allow himself to be the subject of an internet feature story for a website he had never heard of. He was also more than happy to talk Mustangs. And we were on for an interview the following weekend.

This is Mustang Bob

“Mustang Bob” is Bob Becker. He loves Mustangs. His parents owned Mustangs. His two daughters own Mustangs. And, yes, one of those daughters is just three years old. His wife drives a Mustang. He drives a Mustang. He currently owns six of them. He has owned as many as 20. He recently appeared in an October 2014 article by Jerry Heasley in Mustang Monthly. He’s in the book Rare Finds, also by Jerry Heasley. 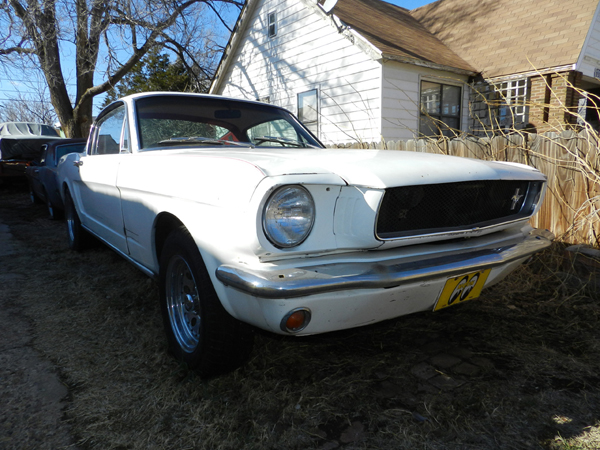 For a short time, Bob co-owned a paint and body shop where he worked almost exclusively on Mustangs. He is known around Amarillo as the guy to talk to if you are looking for a part for a classic Mustang. He has been “Mustang Bob” for about 15 years. He picked up the nickname while working on, you guessed it, a Mustang for Scott Taylor of Taylor’s Furniture and Appliance. Scott was the first person to refer to Bob this way. If you drive by Bob’s house, you’ll spot seven early Mustangs in his driveway. Perhaps the most eye-catching is the tropical blue ’65 coupe that is hooked up to a 1969 travel trailer with near-matching blue paint. 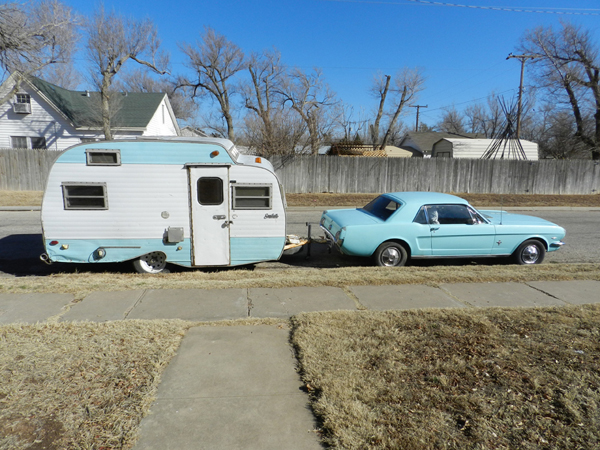 “People stop and take pictures of that all the time,” Bob said about the camper trailer and Mustang that sit in front of his house. There’s also a K-code Mustang that Bob speaks highly of. There is his first daughter’s Mustang, which sits protected by a car cover. There is his three year old daughter’s coupe. There is a six-cylinder fastback, Bob’s daily driver yellow 1968 Mustang, and the list goes on.

But noticeably absent from his driveway is the Mustang that Bob most treasures. It’s the first one he ever owned, the most special of all he has ever owned. It’s his 1965 convertible.

Bob will tell you his Mustang fascination started in high school. He was 15 years old when friends of his older sister came around in one classic Mustang in particular. “They had a blue ’65 or ’66 coupe that I thought was the coolest thing,” Bob said. That’s all it took.

A few years later, in 1977, it was time for Bob to get his first car. He was 17 years old and the Ballwin, Missouri high school senior was considering a Chevy Vega. “You’re going to regret that,” he remembers his dad saying about buying the Vega.

This wasn’t surprising considering Bob’s dad was a Ford guy. He owned a 1966 Mustang himself and had proudly owned Fairlanes and Galaxies through the years. It just so happened that Andrew Becker, Bob’s dad, knew of a Mustang convertible for sale, through a friend, that he thought would be a better buy than the Vega. Bob was obviously interested.

They went to have a look at the convertible, which was being sold by Andrew’s friend’s son. “We’ll get a deal done,” his dad’s friend said about the first generation Mustang. He was right.

For $500, Bob got to take the 1965 Mustang convertible home. Or, more accurately, Bob’s father got to take the car home. Bob didn’t know how to drive a car with a manual transmission like this Mustang had, but that would soon change. And that Chevy Vega? It’s presumably still looking for a buyer somewhere in Missouri.

Bob immersed himself in the car and its history, and quickly learned several important facts about the Mustang. The first was that its $50 per month payment was eating his lunch. “It’s hard to make that payment when you’re only making a few dollars an hour,” Bob said.

He also learned that that manual transmission was not stock. And after running a title search, he found that the then-12-year-old Mustang had had 12 previous owners. At one time it was a present. At another time, it was repossessed.

But Bob didn’t just pore over documents. He got behind the wheel and had a good time. He admits to street racing the Mustang back in Ballwin during his high school days. He used take the car out to highway 40 or “the 40” as they would call it. There, Bob ran the car against fellow classmates and friends until adulthood came calling.

Bob left Missouri at age 21 to work in the oil fields of Texas. He lived first in Houston, then Pasadena, then Gainesville and Fort Stockton. All the while, the Mustang stayed with Bob’s dad. Andrew kept the car safe in storage while Bob jumped around Texas until approximately 1983.

By that time, Bob had moved to Clarendon, Texas. Bob’s nomadic lifestyle dictated that a few more moves were in order, though. He moved to Pampa and then, finally, Amarillo in the mid-80s. And the Mustang was with him for the final few moves.

When Bob dug the car out of storage, he remembered why it was there in the first place. The motor, a non-stock 302 V8, had given up on him. He remembers pulling the engine and transmission in order to get the car back on the road. Bob wanted to swap in a 351 Windsor V8, but had trouble squeezing the bigger engine between the Mustang’s shock towers. Bob ended up pushing the car aside until he was in a better position to handle the challenges it was presenting.

From time to time, Bob would resume the restoration. He remembers having a dispute with a paint and body shop after finding shoddy work done on the car. He remembers having the car stripped down to basically a shell. Other times he would make great progress toward getting it back on the road.

“He’s had it down to a shell. He would sell parts to make end’s meet,” Brittany Becker, Bob’s wife, said. But today, the car is closer than ever to being complete. And Bob proudly proclaims the car is “stock as a rock.”

Both the 302 and 351 are long gone, replaced with a 289 2-barrel V8 that came stock in the car. The manual transmission has also been replaced. Bob put an automatic transmission behind the bone-stock 289, so it would be just how it came from the factory.

Inside, the car has upgraded blue and white Pony interior. Bob added a rally pack gauge cluster to the steering column. The yet-to-be-installed instrument cluster will have faux wood grain to match the glove box door. There is also a console that sports the same wood grain look that Bob has yet to drop in.

Wife Brittany teased Bob that car is not so “stock as a rock,” and pointed to several non-stock additions. Non-stock equipment includes an electric antenna, GT-style exhaust that exits through the rear valance, GT fog lights, and stone guards covering the headlights.

Bob says that the top, which has also not yet been installed, will be done by Troy at Auto Stitch in Amarillo. You might have noticed that Troy appeared alongside Bob in that previously mentioned Mustang Monthly article. The poorly done, run-filled paint laid down years ago is long gone. It’s replaced with silver-blue paint done by Bob’s friend and former shop partner Jay Fick.

With a few exceptions, the car is complete and road worthy. Look for it on cruise nights and car shows, and go shake Mustang Bob’s hand. Now you’ll know his face and his story, and so will I. 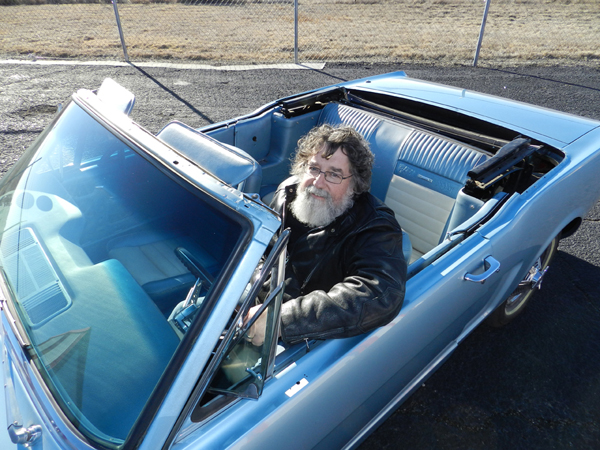 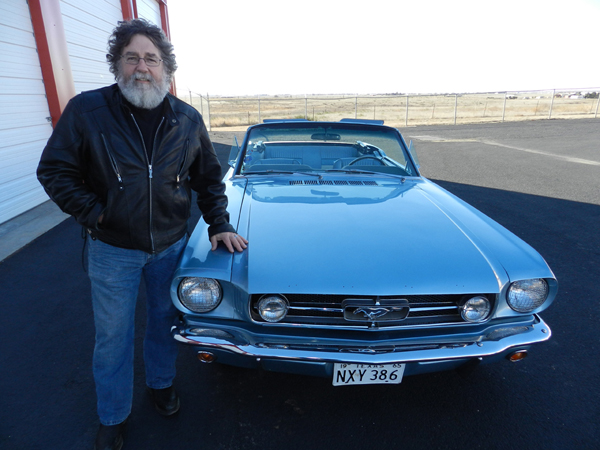 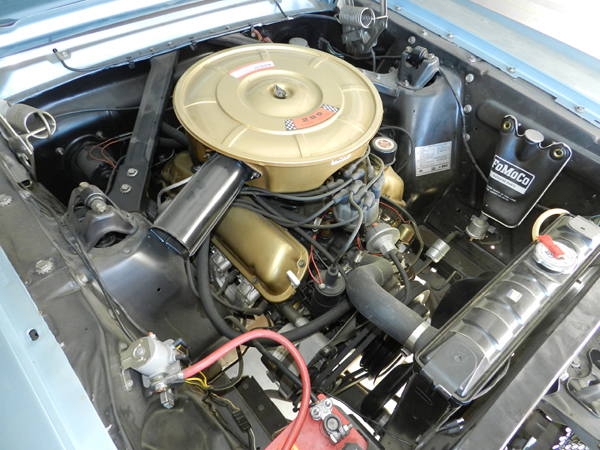 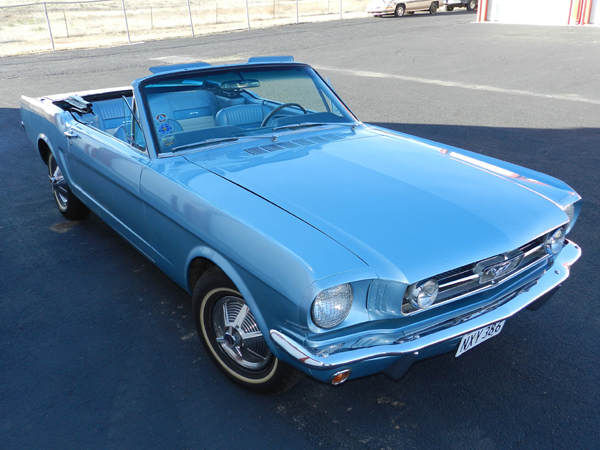 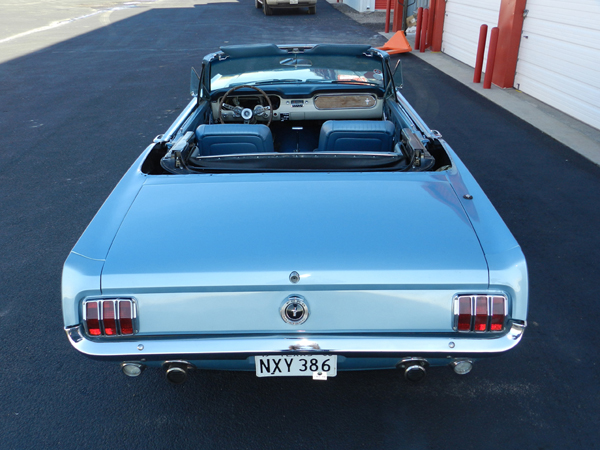 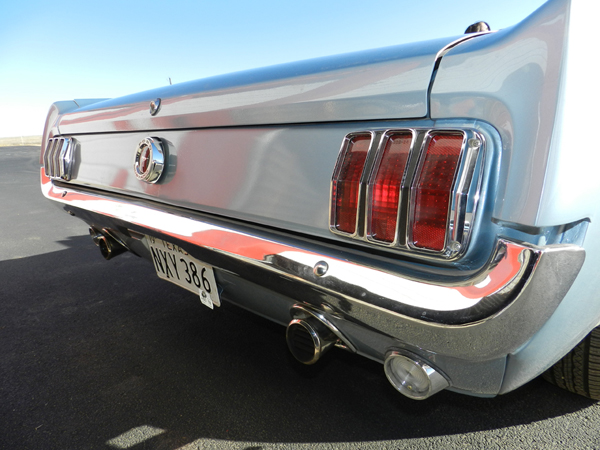 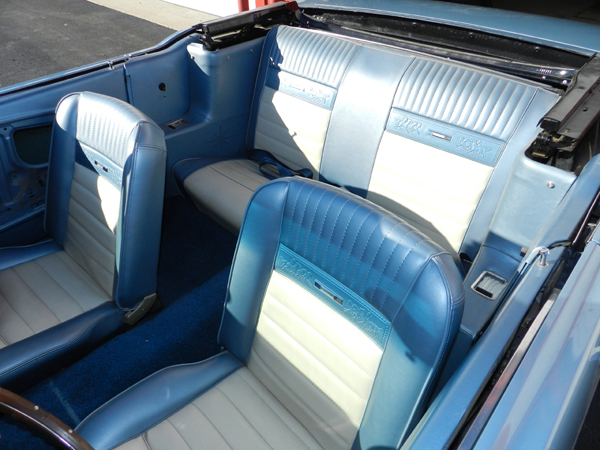 If you or someone you know is local to Amarillo, has an interesting car with a great story, and would like to be the subject of a future story, please let me know. Send the owner’s contact information to chris@amarilloautosearch.com and include a brief summary of why you’d like to see that story on this website. Thanks!